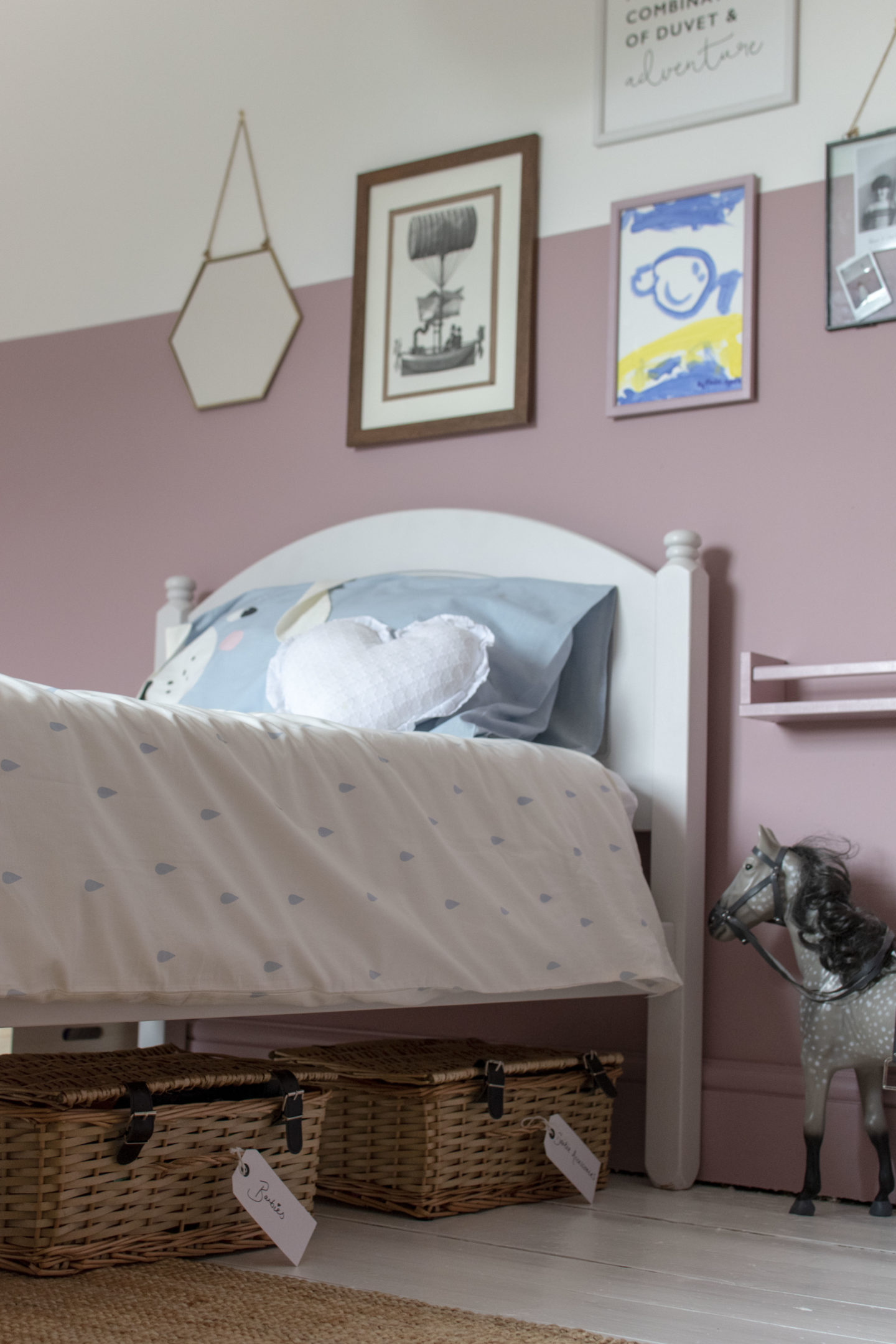 AD in collaboration with Hobbycraft.

If you follow me on Instagram, then you’ll know I spent the last few weeks decorating Elodie’s bedroom. And boy did it need it. We were desperate to add some toy storage because her room was like tackling an assault course.

I’m sure we’re not the only family to make this mistake, but we’ve accumulated a lot of stuff. Way too much stuff. And the reality is, that living with that stuff is stressful.

As you’ll see from the IGTV below, Elodie had far too many toys and not enough places to put them, and so I decided to put that right.

I’ve become a bit obsessed with Marie Kondo (as have half the world’s population) and the best pieces of advice I’ve taken from her, is that everything needs it’s place.

In the past, we’ve struggled to get Elodie to keep her room tidy. It was a constant source of tears and tantrums, but looking back on that video, it really isn’t any wonder. It was completely lacking in toy storage and she didn’t know how to keep it tidy.

In my collaboration with Hobbycraft, I purposely chose things to help Elodie to keep her room tidy, with minimum stress or arguments.

The little baskets we’re using as under bed storage are just the right size for her and have been labelled with tags, so that she knows exactly what belongs in them.

Although I’ve drastically cut down the number of toys in her room, one thing we wanted to keep, were her dress up things. Before redecorating, they were hung on a rail and it looked so messy. I hated it.

In a bid to keep things looking a bit neater and more compact, we chose wooden crates to keep clothes neatly folded inside. I’ve folded them using the Marie Kondo method, which means I stack items vertically, rather than one on top of the other. Such a simple change, that makes a massive difference.

Though my husband did snigger when he saw this. I think his words were “good luck with Elodie keeping it looking like that”, and I have to admit, he’s probably right.

Elodie loves to sit and read, or at least look at the pictures of books before bed, so we used another storage crate to make a book shelf next to her bed. Instead of using paper tags to label this one, I used a stencil, the paint I used on the skirting, and a marker pen.

Speaking of knowing where things go, we’ve also given her a place to store her stationary. Namely, jars, labelled with blackboard paint and chalk pens), and a laundry basket.

And we’ve even thought ahead to getting organised for school, by crafting bags for clubs. We bought some cotton bags and labelled them using fabric pens. These can then be pegged out each week with things for clubs, like forest school and swimming.

If you asked Elodie what her favourite thing from Hobbycraft was, then you can bet your bottom dollar that she wasn’t getting as excited about storage as I was.

She’s in it for the teepee play tent.

True to my usual form, I had totally underestimated how big this was. All three of my children can easily fit inside and they think its great fun. It’s too big for us to have out all the time, but the great thing is that it folds up neatly and so it’s easy to store away.

For the price (£38) and quality, it’s an absolute steal and I can see the kids using this out in the garden for picnics, all summer long.

There are still a few things to finish off in Elodie’s room, but I’m so pleased with how it’s turned out. Here’s to hoping that the toy storage we’ve added means we can keep it tidier than it was before!!

You may also enjoy: